A startup launch. What is the best way to do it? George Burke, a San Francisco based entrepreneur and the co-founder of FounderPool shares his insights on a successful startup launch.

FounderPool, Burke’s new project, de-risks entrepreneurs by pooling startup equity. In the first month of allowing for open enrollments and applying, FounderPool got around 60 founders, who had raised almost a billion dollars between them.

FounderPool was ProductHunt’s #1 Product of the Day.  Since the startup launch in July 2020, the founders have raised billions of dollars for their startups.

How did Burke create such a successful project in a short period of the most uncertain time of the last decade?

First, there was an idea. However, he didn’t transform the idea into a project right away, as many entrepreneurs do. FounderPool is not Burke’s first startup, but the first one he created differently. Burke explained, that the book “Lean Startup” by Eric Rise made him take a different approach.

“I didn’t want to start up anything until validating it. I’ve had too many startups where I feel like I’m trying to push a good idea onto the community onto consumers or customers, but they don’t actually want what I’m creating,” said Burke.

Burke’s advice – do not begin a startup launch  until you know that you have customers for it. Do not build before having customer feedback for your MVP.

Talk to your startup community. Don’t try to ask anyone if they like the idea of your startup, as most of the people won’t tell you the truth anyway.  Instead, ask questions and learn about the challenges, fears, and needs of your audience.

Burke has taken this exact approach – being pretty immersed in a local startup community in San Francisco, he was able to get a short conversation with founders and CEOs of tech companies he knew.

However, he didn’t ask them right away if they would be willing to become customers of this new thing he is creating. Instead, Burke asked about their fears and learned that risk, fear of a total loss, and uncertainty about their business was at the heart of investing challenges the founders experienced.

“80% of them said at the end of the call without me even asking: “Hey, can I be a part of this thing, when you actually launching it?”

To Burke, that was an indicator that there was a market fit and that he should explore the question and actually make a product around it.

“Create a product around the fears and needs that the people you interview have” – advises Burke. 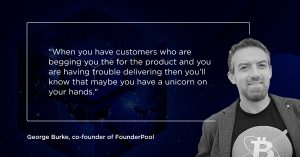 The other element in FounderPool‘s success was the messaging company used – the messaging was coming directly from the users’ words, the way they described their experience with FounderPool. Burke explained, that the way founders of the company want to present it and the way customers actually interpret what the company is, is not the same.

“We rely on how other people see it for that messaging. Somebody said that we are team Avengers for the founders. And we’re like, yeah, we’re definitely using that!”, said Burke.

Finding the right niche and the right messaging is great, but not enough for a successful startup launch.

A personal network was a key element in building trust and attacking the first founders to FounderPool. Many of the 60 first people in FounderPool have been friends of either Burke or other co-founders. That’s how their startup launch succeeded.

You can join Founderpool by submitting an application on the official website and keep in touch with the company’s updates on LinkedIn and Twitter.