Bozhena Klichuk talked to Nikolay Lysenko, a Ukrainian-based entrepreneur and the creator behind the networking club InterRegnum. Lysenko truly believes that networking is the key to boosting the startup industry development and believes that everything is possible with the right people and connections.

Please tell me your story. How was your life before InterRegnum?

I’m 18 now and I don’t have a lot of experience. I used to work on small projects in retail and now have a business on Amazon.

What made you come up with this idea?

We already have a few clubs in Kyiv such as Young Business Club and CEO club. However, the concern I had while looking into those clubs was the absence of young people. I had an impression that everyone forgets about them, so I decided to be that guy that gives them a chance to show themselves and share their ideas. I feel them, I am the same age and that is why I think that I can lead them.

How long was the path from the idea to its creation?

It took me about a year including all the ups and downs.

What were the first challenges you met along the way?

The main challenge for me was a lack of competency and experience, everything was new and unknown. But you learn from your own mistakes and grow from them. The theoretical knowledge doesn’t help until you test it in real life. 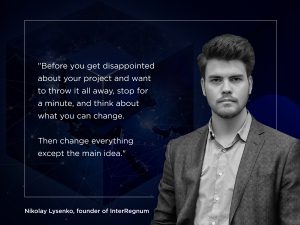 How did you build the connections with companies and mentors that are invited?

Building the first connections was actually pretty easy due to the help of the Young Business Club. They were mentoring me from the beginning that I am really grateful for! Step by step I kept networking, going to events and meeting new people. You never know how the person next to you can influence your life.

What are the further plans?

The main plans are to expand to the four major cities in Ukraine: Lviv, Kharkiv, Odesa, and Dnipro. The main mission is to promote networking, support, and trust among our Ukrainian youth as we can see from our European neighbors.

What would you advise to the young entrepreneurs that are just starting their path?

Before you get disappointed about your project and want to throw it all away, stop for a minute and think about what you can change. Then change everything except the main idea. Another thing is the perception of your idea. If you do it as it is for fun without overthinking and tension, it will definitely work out.